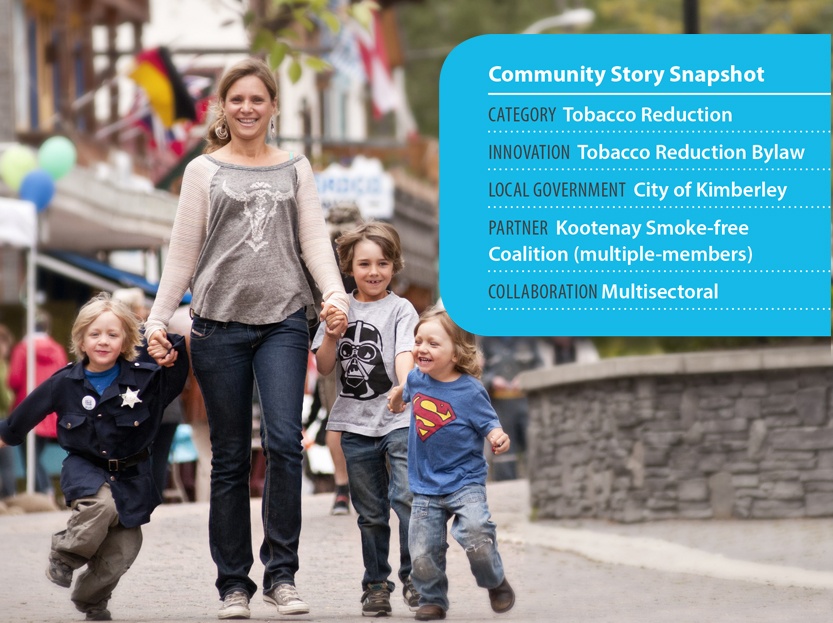 There is a rush of voices as six members of the Kootenay Smoke Free Coalition launch into their regular teleconference call. There are members from multiple organizations (including Canadian Cancer Society, Interior Health Tobacco Reduction and Healthy Communities programs and the BC Cancer Agency Prevention Programs). They come together quarterly based on a shared mandate: to encourage and help municipalities create a smoke-free bylaw.

The work of the Coalition is powerful. It shares resources, evidence-based research, tools and lessons learned working across sectors to build capacity in its program delivery. Its efforts has led to measurable shifts in perceptions in communities, an example of which is the City of Kimberley’s decision to pass a smoke-free spaces bylaw.

It is difficult to tell the story of Kimberley’s new tobacco bylaw without telling the story of the Kootenay Smoke Free Coalition: it was an important part of the change happening related to smoke free spaces in this community, as well as many others.

The Coalition was formed in 2012, and Trish Hill, Tobacco Reduction Coordinator with Interior Health (IH) describes its goal as, “encouraging local governments to go beyond what the provincial Tobacco Control Act restricts as far as smoking in outdoor public places.” This work supports IH’s current tobacco reduction target of 50% of local governments enacting bylaws that go beyond the provincial Tobacco Control Act.

With the popularity of new smoking devices, Cheryl Sidenberg, an IH Tobacco Reduction Coordinator, sees tobacco cessation work as ever-changing and evolving. “It’s also important to recognize that it’s not just about cigarettes anymore, it goes beyond that. It’s about giving people all the information they need to consider around smoke-free spaces.”

The Coalition members observed that there was quite a bit of interest in many Okanagan communities for tobacco bylaws that protect parks, playgrounds, trails and other municipal spaces, but there were only two similar bylaws in all of the Kootenay and Boundary area (the Village of Nakusp and the Village of Fruitvale). This observation led them to a clear goal: making smoke-free public spaces relevant and accessible to rural communities so that more BC residents could breathe a bit easier.

Bylaws as Unique as each Community

They have worked for four years to build strong partnerships with other organizations, to put together the best evidence-based research, and to develop a comprehensive suite of presentations and resources for communities. Each community’s bylaw is as unique as the community itself, supported by the best research available and the process is made as simple and streamlined as possible.

Kerri Wall is a community health facilitator with IH who often serves as first point of contact for communities interested in a tobacco bylaw. “As a team, we do a significant amount of research of what’s happening within the community,” reflects Wall. “We read the official community plan and talk to other folks who live in the community.”

Each community’s bylaw is as unique as the community itself.

Once a community decides to move ahead with its tobacco bylaw, it stays in touch with the Kootenay Smoke Free Coalition and continues to receive help and support to realize its vision. Andrea Winckers, BC Cancer Agency Prevention and Education Leader, emphasizes the importance of helping communities create their own solutions, explaining, “We went from the angle that we can recommend or make suggestions but [communities] know the voice of the people and where they may be willing to go with this work.”

Don McCormick, Mayor of Kimberley, has noticed that the perspectives of people in his community have changed over the years to become much more supportive of smoking bans. “We have come a long way since the early days of smoking bans. Things have evolved over time to include those outdoors public spaces that just make sense [to include in a tobacco bylaw].” Internal community support combined with the help of the Smoke Free Coalition makes it easier than ever to pass tobacco bylaws.

“Those that still smoke understand what we are trying to do and are cooperating. Everyone, including smokers, understands the need to show respect for personal space.” - Don McCormick, Mayor, City of Kimberley

When asked what aspect of the new bylaw makes him the most proud, Don McCormick cites the support from all community members, commenting that, “Those that still smoke understand what we are trying to do and are cooperating. Everyone, including smokers, understands the need to show respect for personal space.”

More than 50 communities across the province have implemented outdoor smoking restrictions similar to Kimberley’s, but this is the first smoke-free space bylaw success for the Kootenay Smoke Free Coalition that exceeds provincial legislation. The Kootenay Smoke-Free Coalition members are confident that it will not be the last however!