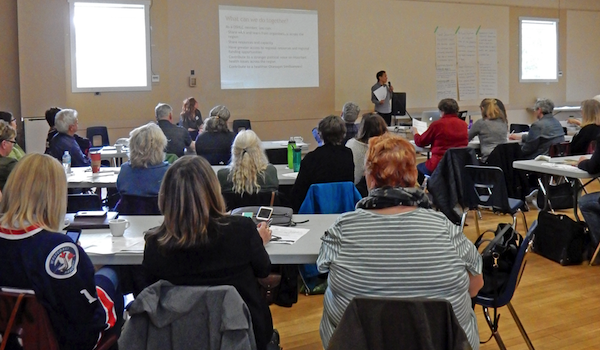 The Okanagan Similkameen Healthy Living Coalition (OSHLC), with help from the BC Healthy Communities team through the PlanH program, recently completed a transformative strategic planning process that empowered the OSHLC to refocus its priorities to work on issues most important to those in the region.

This article highlights that process and provides an example of how PlanH funding and support from BC Healthy Communities’ public health and planning specialists can help your community on the path towards a healthier future.

What is the Okanagan Similkameen Healthy Living Coalition?

The Okanagan Similkameen Healthy Living Coalition is an organization that operates in the Regional District of Okanagan-Similkameen (RDOS). Toni Boot, the Chair of the OSHLC, as well as a Summerland councillor and Director at the RDOS, described the OSHLC as a group of staff members from Interior Health, organizations, agencies, community members and other interested partners who work together to help promote healthy community work in the regional district.

The OSHLC has two primary goals:

Collaboration has been an important factor in the OSHLC’s recent projects. Last fall the RDOS, in partnership with the OSHLC, received a significant PlanH grant for a regional recreation strategy now called RDOS Play. Three members of the OSHLC sit on the task force. Additionally, the OSHLC brought Dr. Kent Mullinix, Director of the Institute for Sustainable Food Systems at Kwantlen Polytechnic University (KPU), to speak at Okanagan College in Penticton. Dr. Mullinix proposed a two-year research project to the RDOS: the Okanagan Bioregion Food System Design Study Project. The completed project will include recommendations for policy change at both the local and provincial level to support a regional food system.

The Coalition’s Path to Success

For more than a decade, the OSHLC has existed in one form or another. In 2017, with the support of designated staff time from Interior Health, the OSHLC began a transformative process to refocus priorities and address specific community health issues important to those in the region.

With the help of BC Healthy Communities’ staff, the OSHLC refocused and developed a strategic plan. This work began in November 2017, with two planning workshops facilitated by Healthy Community Planner Sandy Mackay and Research and Impact Specialist Diana Gresku.

“The members of the coalition were very enthusiastic,” said Gresku. “We helped them to understand their responsibilities and priority areas and to begin to evaluate their programming. The workshops also worked as a feedback session, and Sandy and I took that information back to BC Healthy Communities to develop tools that would help. It was an iterative process, where they provided the ideas and direction and we helped them to put those ideas into practice.”

Gresku guided the development of the logic model to give the OSHLC an overall sense of how their inputs, activities, and outputs support their short, intermediate, and long-term outcomes, and how public health evidence connects those outcomes.

“There is accountability in a logic model,” said Gresku. “Funders can see what you want to do, how you will do it, and consequently trust you more.”

This logic model complemented the organizational overview that Mackay developed.

“I provided a visual representation of both the structure and vision of the OSHLC,” said Mackay. “They described to me what they hoped their role and function in the region would eventually be, and I organized that vision into a model that showed how different partners would interact, their varying responsibilities, and who the different partners could be.”

Mackay explained that a visual representation worked best for two reasons: Coalition members now have a singular way of expressing their vision which allows them to talk about the future using a collectively agreed-upon foundation; and the OSHLC can use the model as a recruitment and outreach tool—community members who may be interested in joining the OSHLC and potential funders can now immediately grasp the intention and impact of the OSHLC.

“Both our tools deliver the same message,” said Mackay. “Diana’s has the academic rigour that will help the OSHLC interact with agencies and funders. My model uses more plain language to help them interact with members, local governments, and communities.”

With Mackay and Gresku’s support, the OSHLC has identified its three priority areas: food systems and food security, active living, and mental health and wellness. In the future, the OSHLC hopes to develop a regional network for each of these three focus areas. The OSHLC serves as a conduit for bringing community members, organizations, and sectors together, rather than doing the groundwork.

“We recognized that as a coalition we were not the folk who should be doing the groundwork,” said Toni Boot. “Our role is to support and bring people and organizations together, much like what we are doing at our upcoming food security forum. We need to remember that we are facilitating a regional approach.”

In March 2018, after completing their work with BC Healthy Communities, the newly transformed OSHLC reintroduced themselves at the regional Healthy Living Fair.

“There was an encouraging level of interest,” Boot said. Some even attended the Coalition’s next meeting. One individual expressed interest in working on the mental health and wellness regional network. She works in the field, has many contacts, and Boot is hopeful that she might prove to be the key to connecting this field.

On April 12th, 2018, in Keremeos, the Coalition hosted a food security forum in partnership with PlanH. Mackay facilitated the event that nearly 70 participants attended.

“We began a conversation,” said Mackay. “The OSHLC wanted to generate enough interest to create a mini-coalition. We aren’t quite there yet, but many who attended expressed interest in further, regular meetings to share knowledge and exchange experiences.”

The forum featured six presenters speaking on a different aspect of food security. Discussions ranged across research, practical local action like the Okanagan Fruit Tree Project, concepts like food sovereignty, and policy and planning that local government can initiate.

The refocused OSHLC is excited to continue their work connecting groups and fostering the collaborative work ethic required to build healthier communities throughout the region.