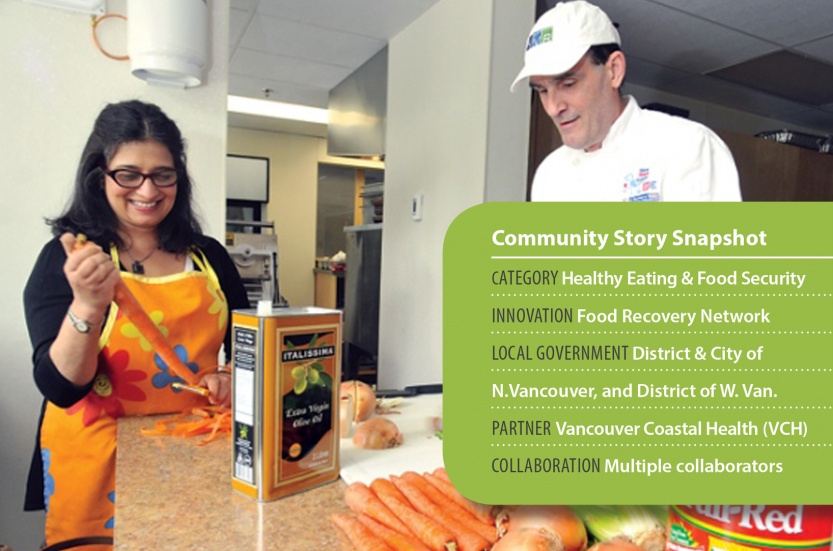 About half of the organic food waste from the industrial, commercial and institutional sectors is edible; a network on the North Shore of Vancouver is working on changing local food systems in order to make use of fresh, edible food before it is thrown away.

The air of the Saint Agnes Church was filled with the aroma of fresh salmon with a hint of lemon zest, tangy braised cabbage, and crispy roasted golden Yukon potatoes. Volunteers from the non-profit organization Sharing Abundance and the Table Matters Network hustled around the kitchen to prepare this delicious luncheon meal for nearly 40 seniors; not only would this lunch help to fill the stomachs of community members in need, but virtually all of the ingredients used to create this meal derived from food that would have otherwise ended up in the landfill or as compost.

This event, along with several other food demonstrations, public and civic learning events, and the development of resources all combined into an initiative called the Scaling Up North Shore Food Rescue Project, spearheaded by the Table Matters Network. The goals of this initiative were to raise awareness of the availability of surplus food and also address community food security by developing the confidence of community organizations to include rescued food in their food programs. They also helped enhance capacity in the community to address food surplus collectively across sectors.

In 2008 the Table Matters Network was convened by Vancouver Coastal Health (VCH) to begin the discussion of food security among multiple local governments. Since its conception, Table Matters has focused on convening people from diverse sectors to engage in discussions around urban food security. At the core of this network are VCH, the District of North Vancouver, the City of North Vancouver, and the District of West Vancouver.

One of the group’s major milestones was achieved in April 2015, when five municipalities, two school districts, the Squamish Nation and the Tsleil-Waututh Nation officially signed the North Shore Food Charter at various council meetings. “We found that there wasn’t any clear direction around how to move forward on food issues”, explained Cristina Rucci, Social Planner with The District of North Vancouver. “We thought, it would be great to have a Food Charter which provides an overarching philosophy and policy that directed our work.”

After working for three years on the North Shore Food Charter, its endorsement solidified the importance of growing a sustainable food system along the North Shore. This allowed the Network to harness some much-needed traction to move forward in their efforts, especially the Food Rescue Project.

Learning from the Process

Food waste is a significant issue in Canada. Landfill space is declining for many urban regions, and food waste contributes to increased greenhouse gas emissions. Not only does this impact the health of the environment, but a Metro Vancouver study estimates that approximately half of the organic food waste is edible.

“We focused on connecting community service organizations with food rescue organizations so they know where to get rescued food.” — Rubina Jamal, Table Matters

The Project was launched with funds received from the PlanH Healthy Communities Capacity Building (HCCB) Stream Two grant. The goal of the project was to connect grocery stores, food recovery organizations and food banks to reduce organic waste disposal for retailers, and provide healthier food options to individuals in need. However, these stakeholders had limited awareness about how much unspoiled food was being thrown into landfills. Community service agencies also did not know who to get rescued food from, or the best ways to use rescued food.

One session held in January 2015, served nearly 40 seniors at the Saint Agnes Church Seniors Moments Luncheon in North Vancouver. In collaboration with Sharing Abundance and Quest Food Exchange, these organizations learned how to use rescued food to produce nutritious and tasty meals for community members. “We focused on connecting community service organizations with food rescue organizations so they know where to get rescued food”, explained  Rubina Jamal, Project Coordinator for the Scaling up Food Rescue Project,“ and [we’ve also been] mentoring them to get them comfortable preparing meals using rescued food”.

In total the Food Rescue Project engaged approximately 500 service providers, community leaders and volunteers, and fed over 450 community members. “This is the work that makes me passionate about the work that I do,” said Rucci. “[Seeing] the energy and excitement, and the possibilities and the dreams of people coming together. And not only dreaming, but actually achieving many things.”

One of the most significant impacts of the Food Rescue Project was the shift in attitudes toward using rescued food. “We’re right in the process of this shift,” said Scott Rowe, Technical Advisor and Chef of the Scaling up Food Rescue Project. The Network noted that food retailers who were not involved in food recovery are beginning to find ways to work with local organizations such as the Greater Vancouver Food Bank to address food recovery. The team found that the community possesses immense knowledge and resources and is exploring new ways to coordinate resources.

This project is just the beginning for the Table Matters Network. Now that the group has helped to generate awareness about the issue of food recovery, it is preparing to address the systemic challenges that it has encountered and has developed a Food Rescue Working Group to explore ways to continue food rescue initiatives.