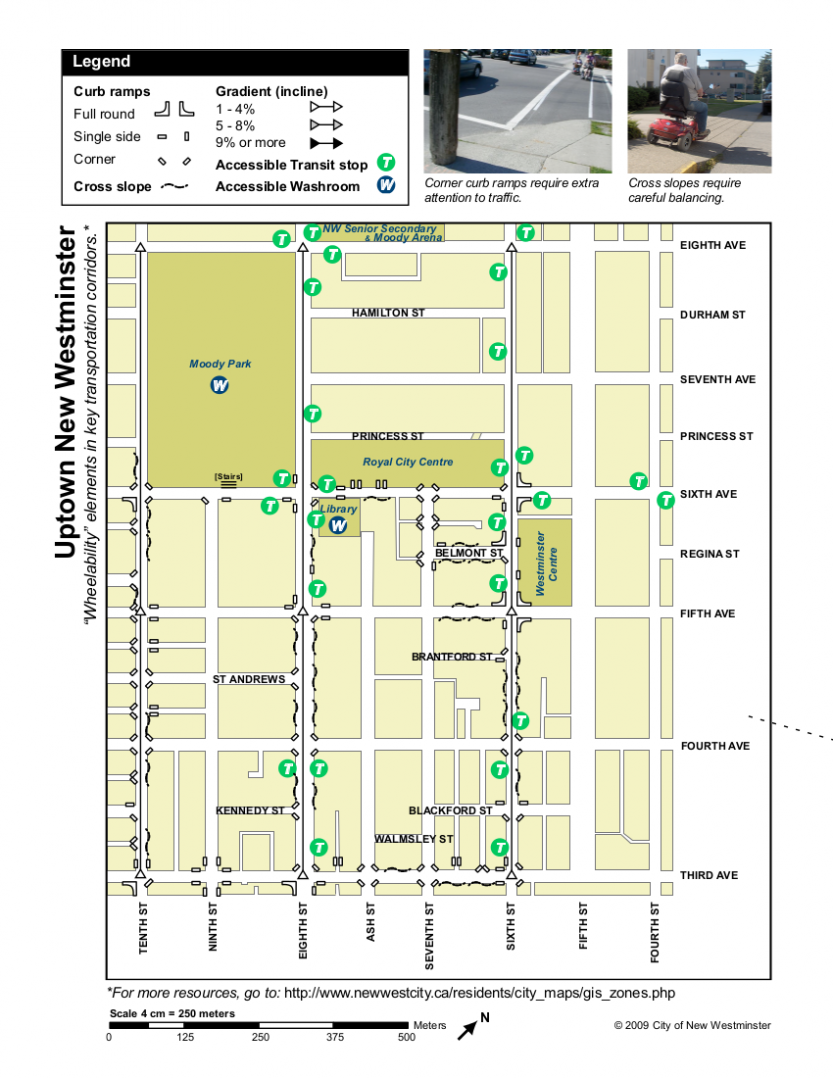 New Westminster’s Seniors Advisory Committee, Seniors Planning & Action Network (SPAN), and Special Services and Access Committee all advise elected officials about decisions regarding community issues. Leading up to 2009, there had been multiple discussions with these bodies about issues facing the aging population in New Westminster, especially in the Uptown area where about a quarter of the population is comprised of seniors. Also, city staff noticed an increase in inquiries and complaints from older adults about barriers to active transportation. The City decided to identify and address issues impairing mobility among seniors, people who use mobility aids, and people with disabilities. This led to the development and successful implementation of the New Westminster Wheelability Assessment Project.

With assistance from SPAN, the City successfully applied and received funding from the Built Environment and Active Transportation (BEAT) and Community Grant Planning Program offered by the Union of BC Municipalities (UBCM). The $25,000 grant covered expenses for the Wheelability Assessment Project.The goal was to improve transportation conditions for those who utilize a scooter, wheelchair, walker or other mobility aid. Older adults and those with mobility limitations were targeted for this project.

Next, a two-day community assessment of the two core areas of New Westminster (Uptown and Downtown) was completed. This was one of the most valuable components of the project. Over 45 community members with mobility limitations, city councillors, and staff walked the two core areas of New Westminster. Community members voiced their concerns directly to city staff and elected officials. These concerns were categorized under five themes: design (e.g., sidewalk surface treatments), maintenance (e.g., cracking of sidewalks), guidelines (e.g., street crossing signal times), enforcement (e.g. business’ sidewalk signage) or other (e.g., impatient drivers).

Lastly, a Community Survey Profile was distributed to gather information about demographics, preferred travel routes, and built environment barriers. Responses were received from 121 people who use mobility aids.

The assessment and survey results led to the creation of two wheelability maps, one of Uptown and another of Downtown. These maps include the placement of accessible transit stops and washrooms, curb ramps, cross-slopes, and sidewalk gradients. Recommendations from this research were presented to City Council, which have ultimately informed policies, practices, and design decisions related to wheelability.

Check out this video: