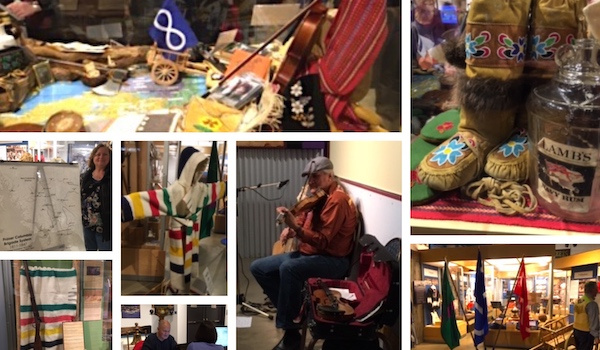 Nine years ago, the Mid-Island Métis Nation (MIMN) could not pay rent, let alone develop and implement programs to tackle systemic issues in community health. MIMN’s members were doing everything they could to keep the association moving forward, from garage sales to raffles, but the future was unclear, and coordination with other Vancouver Island Métis Chartered Communities was sparse.

Joy Bremner was elected President of the MIMN at that time, and in the intervening years, has worked hand-in-hand with other MIMN members to build the organization into the thriving one we see today. Early examples of ground-up community development success included pulling together a 13-person board, and raising $1,200 for a mailout to reach and reconnect with every MIMN member.

“The Island becomes the community instead of each of us being separate,” says Bremner, reflecting on the project. “It’s incredibly exciting.”

Based in Nanaimo, MIMN is one of seven Chartered Communities in the Island region, and supports Métis people living in the area to connect with their distinct identity, heritage, history, and culture. Métis Chartered Communities are represented at the provincial level by Métis Nation British Columbia, the governing organization that promotes the political, legal, social, and economic interests of Métis people in B.C.. Island Métis Chartered Communities in the past had faced challenges to regularly rendezvous and build capacity in all the communities. Most of the communities had faced similar funding shortages to MIMN, and many did not have regular staff in a position to manage a healthy community project.

Through the PlanH grant, MIMN took the chance to build on their existing organizational skills to improve cultural health awareness. This was done through collaboration and building of trust over time. Though the project has finished, the connections remain.

“We’re trying to really make sure we’re staying connected, making those efforts and we are reaching out to each other,” Bremner says. She describes the importance of attending events and meetings, or even making a phone call as a show of support.

The sharing of wisdom and skills through cultural presentations was an invaluable part of the Vancouver Island Métis Community Health & Wellness Collaboration.

“Knowledge keepers are going up and down and all over the Island now,” shares Bremner, though it took time to establish this relationship. Some communities had to overcome a hesitancy to share information—for some, it was difficult to even describe the struggles they were facing financially. “Leaders embarking on this work need to understand that capacity varies from community to community,” says Bremner, “and creating an atmosphere of support and inclusion is vital for trust-building.”

“You won’t be looked down upon just because you haven’t done something yet.” She recommends cultivating belief in your own community, so that you have the confidence to reach out to other partners, “even if you only start with one.”

One of the most effective moments in the project happened during a meeting on the MIMN Strategic Plan. While the MIMN could have held a members-only meeting, they instead saw the meeting as a chance to invite representatives from outside communities and organizations in, to witness their strategic planning process and see the connections to their own communities and initiatives. While visiting representatives were not at the main table, MIMN on occasion opened the floor to them for comments and dialogue.

“Even though it was aimed at [developing] a mid-island strategic plan, it also benefitted all of them. They ended up going away with a different picture of how to get things done. It was a variety of new ideas and possibilities.”

The MIMN’s journey over the years has led to people being invested and involved in community health and wellness. Now, they have arrived at the point where they can offer some support to other communities as those communities build their own capacity. They’re also exploring ways to build self-sustaining funding, so that MIMN and other communities can gain independence from the grant funding model.

Bremner views the Vancouver Island Métis Community Health & Wellness Collaboration project as an overwhelming success and is looking forward to new projects building on it.

“Moving forward has enabled new things to happen for us,” says Bremner of the project. “It’s increasing the sense of belonging for all of us, as well as opening the door for connection to a variety of service agencies and organizations outside of the Métis community. It’s so nice when something goes this well!”