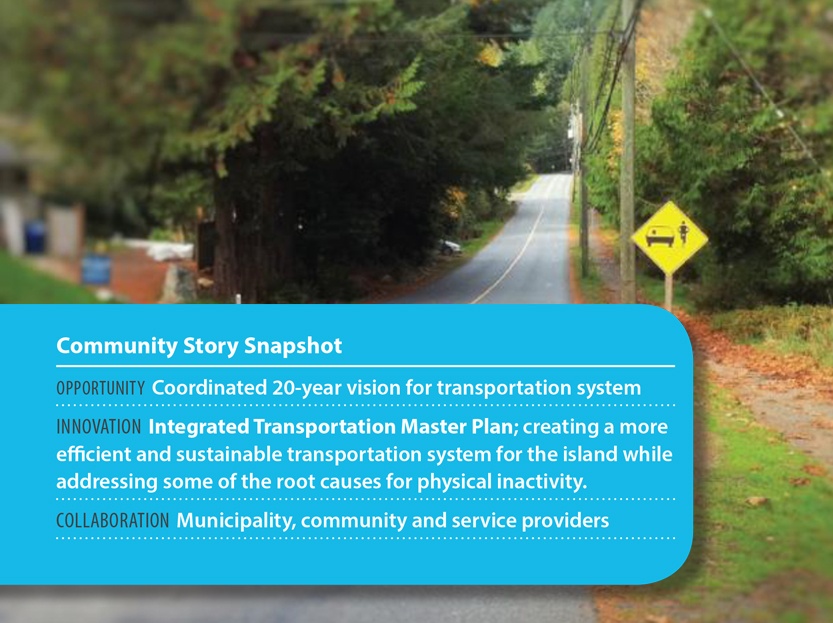 For the last two years the local government of Bowen Island has led a multi-sectoral and collaborative process to develop an active transportation network and reduce citizens’ reliance on cars. The result is the Integrated Transportation Master Plan (ITMP), a 20-year vision that will guide the municipality in all its transportation decisions.

The Setting and the Challenges

Emma Chow, an Island Community Planner for the Bowen Island Municipality, leans back in her chair, to rest her eyes from reading documents on her bright monitor. Chow has spent the morning reviewing documents for Bowen’s new Integrated Transportation Master Plan (ITMP) developed in collaboration with a working group of community members and deep community engagement. The ITMP is the municipality’s first coordinated vision for Bowen’s transportation system. Created with extensive input from residents and the transportation advisory committee. The vision is exciting and unique – incorporating the unique local culture of the island along with cutting-edge transportation solutions in a global context.

Incorporated in 1999, Bowen Island is a rural municipality only kilometers off the coast of Horseshoe Bay, just north of Vancouver. With only 3,680 people as of the 2016 census, it’s a small community where most people know or recognize each other. Mountainous and lightly developed, the island’s residents have spread along a network of narrow, winding roads.

“It’s slightly safer to walk than to bike,” Chow says, “as in they are both quite dangerous, but biking is a lot more dangerous.” Chow knew before their community consultations that issues about safe active transportation existed, but the unanimous concern surprised her. “It was all types of stakeholders like the families, kids, seniors, business owners, and visitors.”

The situation has not been exaggerated. For the entire 87 kilometer network of roads, Bowen Island has only one kilometer of paved sidewalks, an impediment for all but the most intrepid and physically abled individuals. If you want to walk at night you have to walk in the dark as the island has no street lights. Don’t even think about that bike either – there are shoulders or bike lanes at all. The island does have two bus routes, however, users either live too far away from the routes or, if the walk is short, few feel safe enough to actually brave the road.

Evidence shows that active transportation is one of the most cost-effective ways for an individual to become more physically active and remain healthy in the long-term.

However active transportation like walking, taking public transport or cycling has a lot of potential benefits - evidence shows that active transportation is one of the most cost-effective ways for an individual to become more physically active and remain healthy in the long-term. Investments in active transportation infrastructure yield positive health outcomes for residents and make for livelier public places, with less traffic congestion and cleaner air.

The Bowen Island ITMP addresses some of the root causes for physical inactivity. It will help provide safer active transportation options and promote active living, with a co-benefit of addressing the health impacts of climate change.

The ITMP project has involved over a year and a half of collaborative investment, coordinated by Bowen Island’s municipal government: participants have included citizens, TransLink, private business, BC Ferries, ICBC, and the Vancouver Coastal Health Authority (VCH). VCH not only directed Chow and the municipality towards the PlanH grant program, but also supplied some examples of other city’s active transportation plans. VCH also helped sponsor an active transportation forum on the Sunshine Coast. “It was a forum for planning in a rural context,” Chow says. “It really helped us, because most of the literature you find is for planning in an urban context. We came back with so many good ideas we could actually apply.”

VCH also provided a speaker, Dr. Mark Lysyshyn, Medical Health Officer for the North Shore and Sea to Sky Coastal Health Region, who spoke on active transportation. Lyshyshyn provided evidence-based research about looking for upstream solutions such as improving the built environment. “Bowen Islanders want to be able to walk, bike and use public transportation.  It was great to be part of the discussions about how to build new opportunities for active transportation on the island,” said Lysyshyn. “He gave a broad overview on healthy communities and the importance of active transportation, his talk really helped to establish common ground,” says Chow.

“Bowen Islanders want to be able to walk, bike and use public transportation.  It was great to be part of the discussions about how to build new opportunities for active transportation on the island" - Dr. Mark Lysyshyn, Medical Health Officer ,Vancouver Coastal Health

Without this common ground, even the most innovative programs can struggle. Bowen Lift, a community grass-roots initiative started in 2010, tried to expand on the island’s hitchhiking culture and create a more formalized system. With community grants Bowen Lift created a series of stops around the island on level areas with signage. However participation in the program did not reach critical mass due to lack of common ground.

How is an ITMP an Upstream Solution?

The municipality has placed a strong emphasis on community engagement with the ITMP project. Developed in five phases, the ITMP will guide the next 20 years of transportation development on Bowen Island.  Holistic planning is an important upstream solution for health and well-being. The ITMP’s goals are: “safety, accessibility, inclusiveness, autonomy, efficiency, and climate change mitigation.” A vision document from the municipality illustrates some of the goals very well:

Pedestrians and cyclists will have safe and direct connections to neighborhoods and key destinations. Transit will run in the evenings, seamlessly integrate with the ferry and water taxis, and serve more areas. Electric and low-speed vehicles will be common on the island. Bowen’s strong sense of community will continue to foster a robust culture of hitchhiking and ridesharing.

To make this happen, the municipality hosted workshops, information sessions, neighbourhood meet-ups, and a pop-up booth to engage all parts of the Bowen Island community in a collaborative dialogue. A fruitful example was a multi-stakeholder workshop that included the organizations and people involved with transportation on, to and from Bowen.

Innovations from the People of Bowen Island

When community consultation began, the people of Bowen showed up: over 1000 people, nearly a third of all residents, participated. This not only helped to contribute ideas to the ITMP, but also contributed to creating a healthier community by increasing community capacity building and citizen engagement. The municipality even hosted an after school session to seek the input of the youngest community members. “What really impressed me was how engaged the community of Bowen is,” says Chow. “So many people who came out already had great ideas about what we could do.”

Some of these included a real-time tracking app that would display the location of each of the two buses on a computer or phone. On Bowen, there are no bus stops, and riders simply flag the bus down when they want a ride. This flagging system combined with the fact that the bus always waits for the ferry to arrive before leaving the terminal (even when a ferry arrives late) means that it is often very difficult to plan a trip on the bus. The real-time tracking app would solve this problem. Another solution involved a demand-response system, an “uber-transit hybrid,” Chow says, “people could call in, and after a number of pick-ups have been queued the bus would pick everyone up.”

The community has embraced the ITMP project. The process has encouraged the community to not only identify transportation challenges and opportunities, but to become empowered to help improve the situation. “Ultimately any significant improvement will cost money,” Chow says, “and so we need the community to support investment in their ideas.”

Not the End – The Beginning

Bowen Island is an old community but a very young municipality that inherited dated infrastructure designed with only the car in mind. What the ITMP project has given the island is a unified vision and a plan to help realize that vision over the next 20 years. The ITMP is so much more than that, however, and a large scale collaborative processes such as thisproject will help to build this new identity and forge strong relationships. 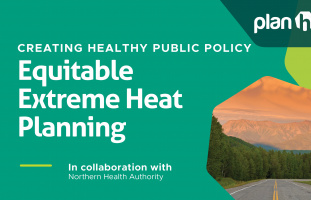 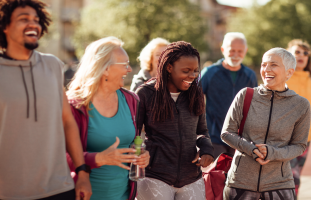