Communities across the province are releasing Vital Signs reports in recognition of Vital Signs Week 2019, which ran from September 30 to October 5.

Vital Signs is led by community foundations across the country, with more than 65 organizations taking part nationwide. The reports cover a variety of topics essential to community well-being and quality of life, such as housing, safety, transit, the environment, and the arts. Driven by local data collected through in-depth civic engagement, the results indicate overall resident satisfaction on local policies and issues, as well as outlining their concerns.

Eleven communities and community foundations in B.C. are participating this year, with five communities - Victoria, the Sunshine Coast, Prince George, Vancouver and West Vancouver - having already released their reports. The Community Foundations of Canada website will be continuously updated to include all Vital Signs reports from the 28 participating communities nationwide.

In Victoria, participants indicated feeling connected to their community (75 percent), appreciated the natural environment, climate, and air quality of the region, and voiced concern about the cost of living, housing and health care.

In Prince George, 66 percent of seniors and 87 percent of youth felt a sense of belonging in the region, but the Northern region reported a lower rate of life satisfaction, with their 89 percent satisfied rate falling under the national rate (93 percent) and provincial rate (92 percent).

The Sunshine Coast opted to publish an updated ‘Vital Brief’ rather than a full report, and noted a big change in population demographics, with the median age rising from 48.5 in 2006 to 55 in 2016, higher than the provincial average. Further, their population of adults 80 and over is projected to double by 2029.

The Vancouver Foundation’s report focuses on community participation across the province and summarizes the answers from nearly 8,000 British Columbians across five generations. Their report found that a majority of British Columbians (62 percent) are contributing to their communities, but that many people (45 percent) also felt there were barriers to becoming more involved.

West Vancouver reported a strong sense of community belonging (88 percent) and a high rate of life satisfaction (rated 8.3 out of 10). However, the report also brought housing affordability to the forefront, reporting that a majority of renters (58 percent) are spending more than 30 percent of their income on housing, and that seniors made up 48 percent of households spending at least half their income on shelter costs.

For more information about Vital Signs, visit the Community Foundations of Canada website. 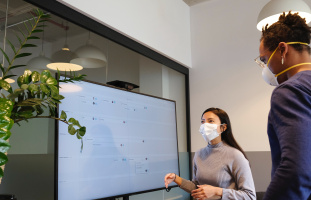 Grants awarded to 20 local governments across B.C. to improve community health and well-being

More Indigenous and non-Indigenous local governments in B.C. will now be able to embark on projects to improve community health and well-being for their constituents, thanks to $150,000 in new grants and additional customized supports recently awarded by PlanH, a partnership of BC Healthy Communities Society and the Ministry of Health.